Inflation angst could make its jarring presence felt once more, as the upcoming US inflation data release holds court amidst the coming week’s global economic calendar:

For the US July consumer price index (CPI), the median estimate from the Bloomberg survey comes in at 8.8%.

If so, that would mark a moderation in the headline inflation print from June’s 9.1%, after four consecutive months of the headline CPI print exceeding market forecasts.

Signs of easing inflationary pressures may allow the US Federal Reserve to start backing off from its aggressive rate-hiking stance, having already raised interest rates by a cumulative 225 basis points since March.

Markets are expecting just another 100 basis points to go in this ongoing rate hike cycle, before the Fed then reversing course by mid-2023 to avoid tipping the US economy into a recession.

In other words, markets think that the “largest chunks” of the Fed’s hiking cycle are already behind us.

Such a narrative has put the US dollar in the back seat in recent weeks, in turn allowing risk assets such as stocks and cryptos to stage a recovery.

(Note that such expectations may alter significantly later today – Friday, August 5th – given that this article is being written before the release of the July US nonfarm payrolls report).

US dollar pulls away from multi-year high

Since posting a 2-year high on July 14th, the equally-weighted US dollar index has faltered back to its 50-day simple moving average (SMA). 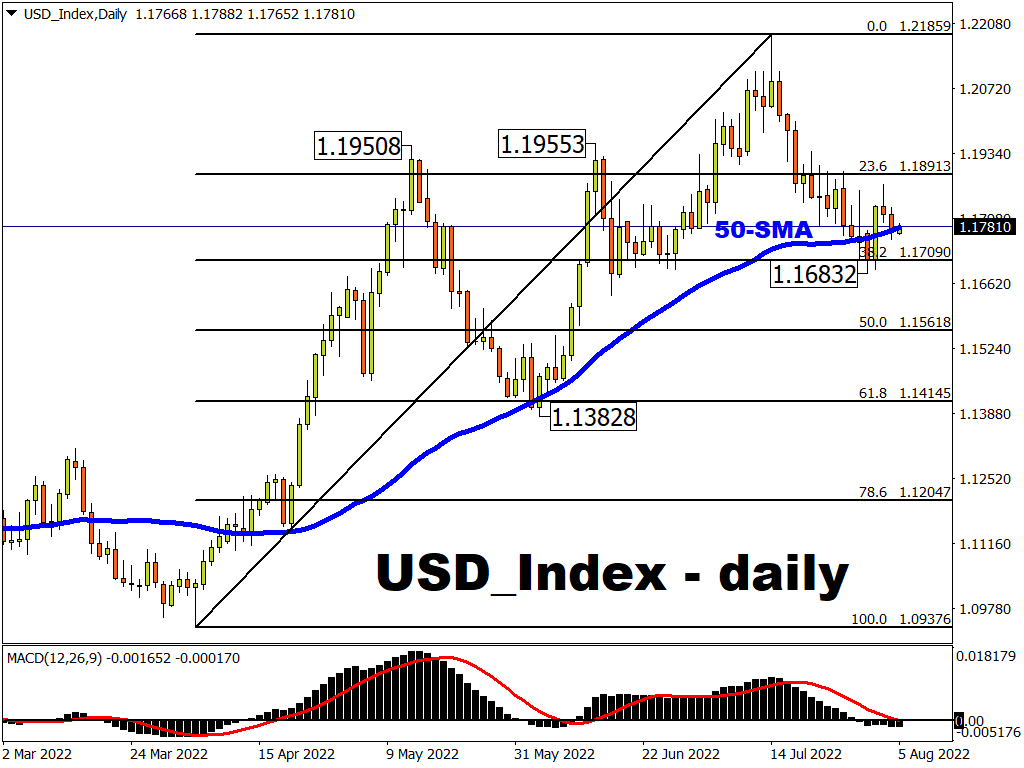 This USD index measures the US dollar’s performance against six other major currencies, all in equal proportions:

How might the upcoming US CPI print impact the dollar?

A lower-than-expected CPI print may prompt this USD index to fall below its 50-day SMA and test the 1.16832 – 1.17090, being its recent cycle low and a key Fibonacci retracement line since its ascent from early April.

Otherwise, a fifth-consecutive upside surprise in the official CPI data, that forces markets to restore their bets for more larger-than-usual Fed rate hikes in the pipeline, may see the USD index climbing back above its 50-day SMA.

Immediate resistance can be seen around the 1.18913 Fibonacci level, with stronger resistance set to arrive at the “twin peaks” around 1.195.

Pay attention also to the roster of Fed speak in the coming week, which may offer greater insights into how Fed officials interpret the path forward for US interest rates.

Fresh meaningful insights into the path forward for US interest rates are set to sway the greenback, which in turn would reverberate across the FX universe.

10 Best Natural Shampoos and Conditioners For Every Hair Concern

Will My Skincare Products Go Bad if They’re Left in the Heat?

Honey Lip Balm: Is It Good for Your Lips?